Link to Music for Wedding Videos

I usually deliver by dropbox or hard drive.

I will include the folder size so you know you have downloaded the correct amount. If I forget to include it please ask for the total.

Deliver XML file by email in new email with  the couples names as the subject.

Please note any issues/ problems faced with the edit in the email or any clips you marked for my attention.

If you are using Plural Eyes include all the audio drift files.

Also create a dropbox/google drive folder where you can drop all the xmls for every project and send me the link so I can bookmark it for easy access.

You will be paid straight away or as soon as I get back to the office, its very rare I don’t pay within 24 hours.

Never delete project files until I confirm I am happy and I have delivered the project to the client.

Please read this brief before delivery to ensure projects are completed correctly.

1 – Prep ; This is highlight footage set to music.

2 – Ceremony ; This is multicam footage with multiple audio sources.

3 – Greeting line ; Usually one long wide angle with a second angle for the first 2-3 minutes. This is highlight footage set to music.

4 – Sign2Sit: This is highlight footage set to music.

7-Evening: This is highlight footage set to music.

8-Dance: The first dance is multicam footage with 2 angles. The rest of the dancing is highlights.

Try not to include footage of videographer or photographer if possible unless it is necessary or a very strong shot.

Please fade in an out for all audio, e.g. at the start and end of speeches, switching audio tracks during the ceremony edit.

Fix exposure and white balance on all clips.

I usually only use transitions/dissolves when switching between locations or showing the passage of time.

If one of the angles is poor composition or slightly soft/out of focus in parts for the multicam for the ceremony and speeches it is ok to leave it out or use it very little.

If there is video of family photos or bridal party photos mix them in with other footage rather than have them in a row.

Check inside the multi-cam file to make sure all important files are linked and manually link if you have too.

If the exposure and white balance is changed mid shot, don’t show the change if possible, unless it is a strong shot, chose either side of the transition.

Beware of audio levels, try and keep them between -12 and -6 db

If you are using plural eyes to sync the multicam footage please send the audiodrift files when you are delivering the xml/library.

All Audio and video files should be imported into the sidebar so I can see them in the browser. 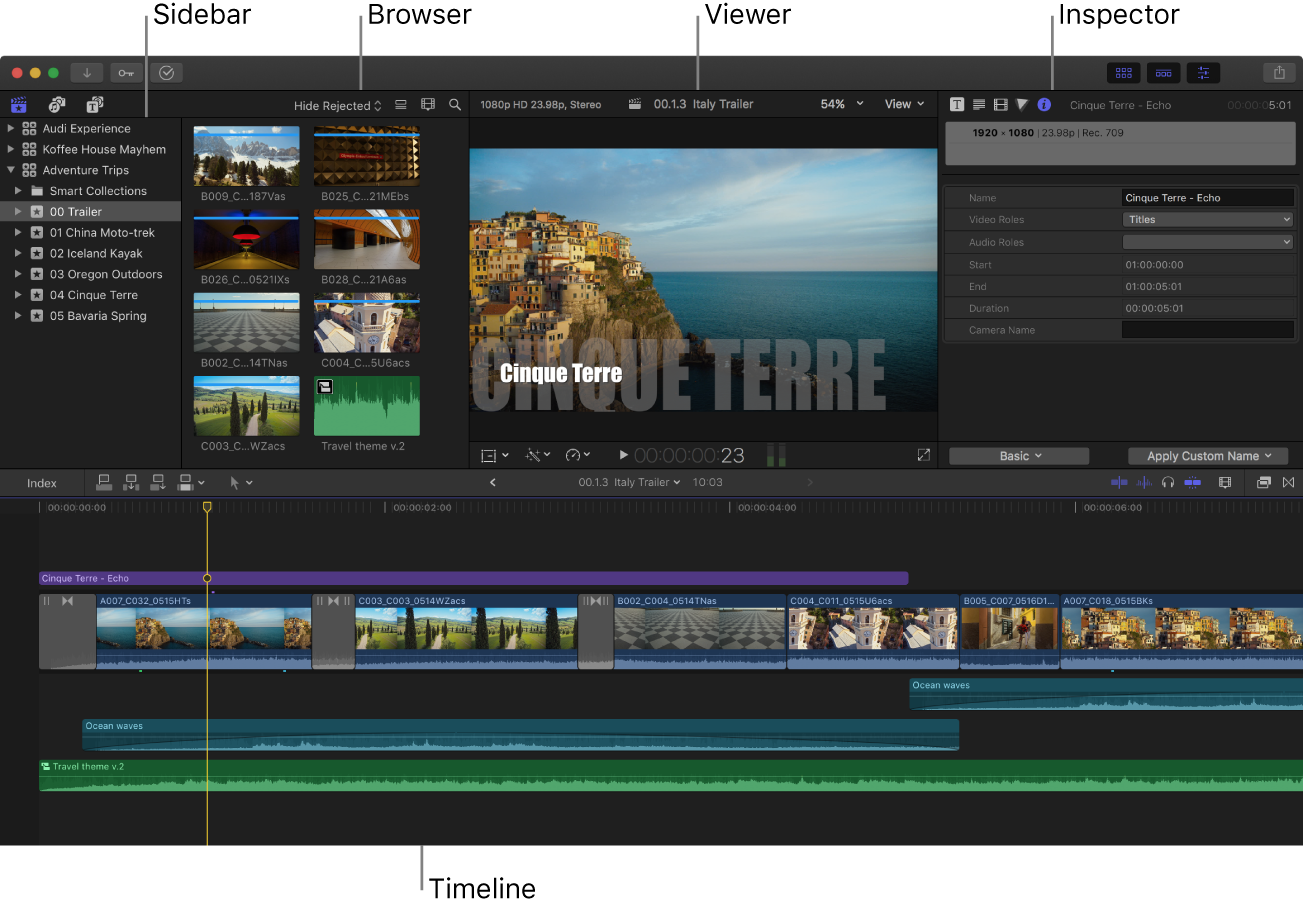 The project should appear in the timeline, not on it, like illustrated in the image below;

1-2 seconds is long enough for static b roll shots. If they are shaky, convert to slow motion or use the hold option.

2-3 seconds is usually plenty for most other shots unless there is good animation, bridal party laughing, drinking champagne etc. In other words if it is boring shot keep it short, if it is good, longer is fine.

For ceremony, speeches and dancing clips can be a lot longer as they are part of a multi-cam edit.

Audio for Prep and before the Ceremony

Audio For the Ceremony

After the Greeting Line